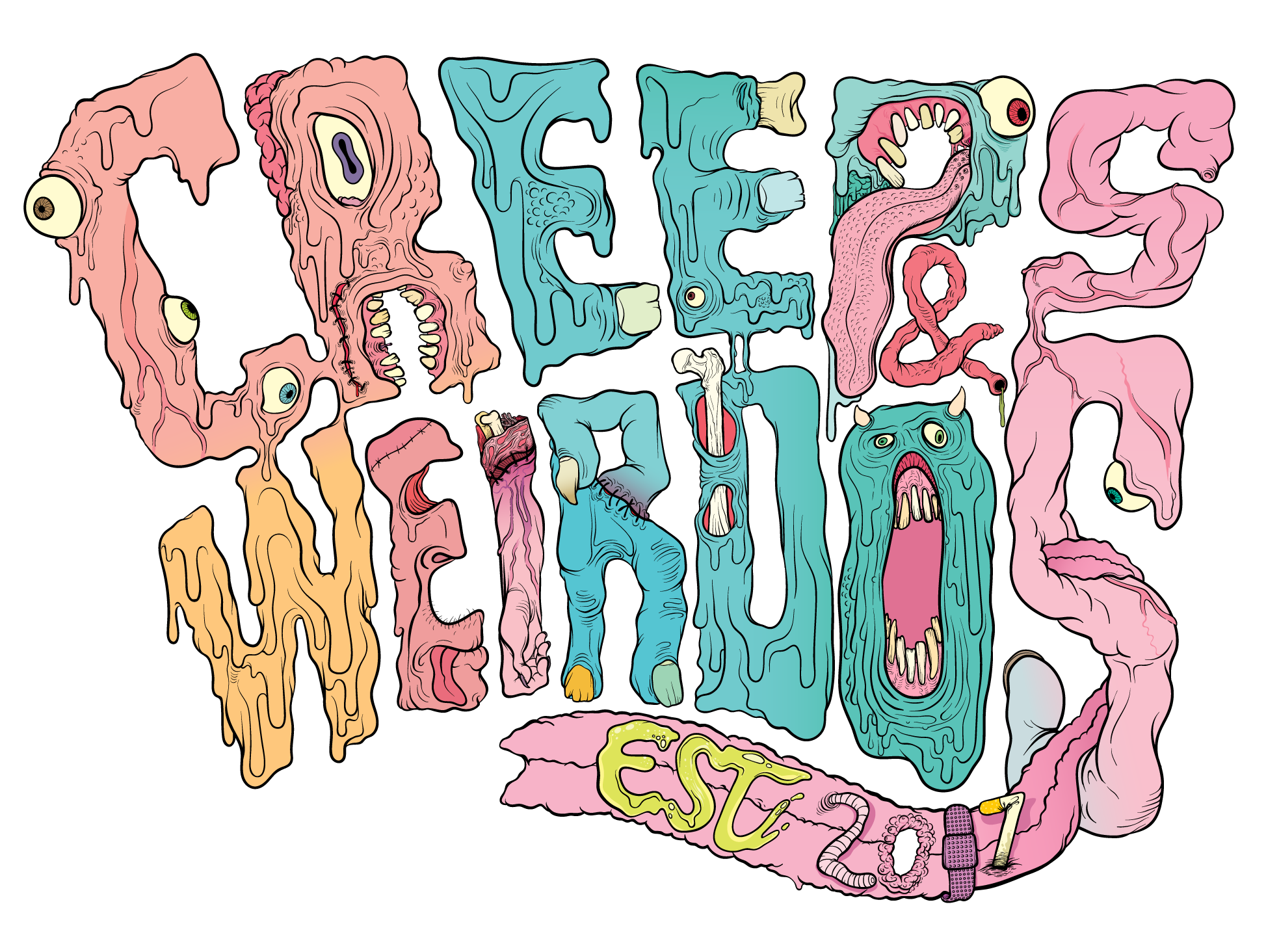 Own a Piece
of NFT History

Inspired by the Rare Pepes, and adapting the Cryptopunks smart contract, the Creeps & Weirdos collection was launched by DADA in October 2017, before Cryptokitties and the ERC721 Standard.


The Creeps & Weirdos collection was created at the dawn of what is considered cryptoart today. The collection was featured in Artnome’s article The Blockchain Art Market is Here in December 2017, and became the official image of the seminal Rare Art Festival in January 2018, a milestone event in NFT history.

A hybrid between crypto collectibles and rare digital artworks, C&W possesses the dank aesthetics and the collectible structure of the projects at the time, but they were not intended as trading cards, memes, avatars, or even a game. Instead, they were conceived by DADA as a decentralized marketplace for rare digital art, foreshadowing and thus paving the way for the current cryptoart marketplaces.


DADA is an art creation platform and artist collective, a virtual home to people from all over the world—from a bodybuilder in Argentina to an evangelical pastor in the US, a farmer in Kenya, and a former punk in England, to name just a few. Our decentralized community includes many influential artists, technologists, researchers, and collectors in the blockchain ecosystem.The artists who created the Creeps & Weirdos are among the first in the world to have minted NFTs. Most of them have been part of the DADA community from as early as 2014, and are still very active today.

The DADA Collective has also been at the forefront of the many live events featuring digital art. Our live drawing performances have been featured in art galleries and events around the world, including Soul In The Machine at the Ethereal Summit, and Screens: An Exploration at the Tate Modern in London. 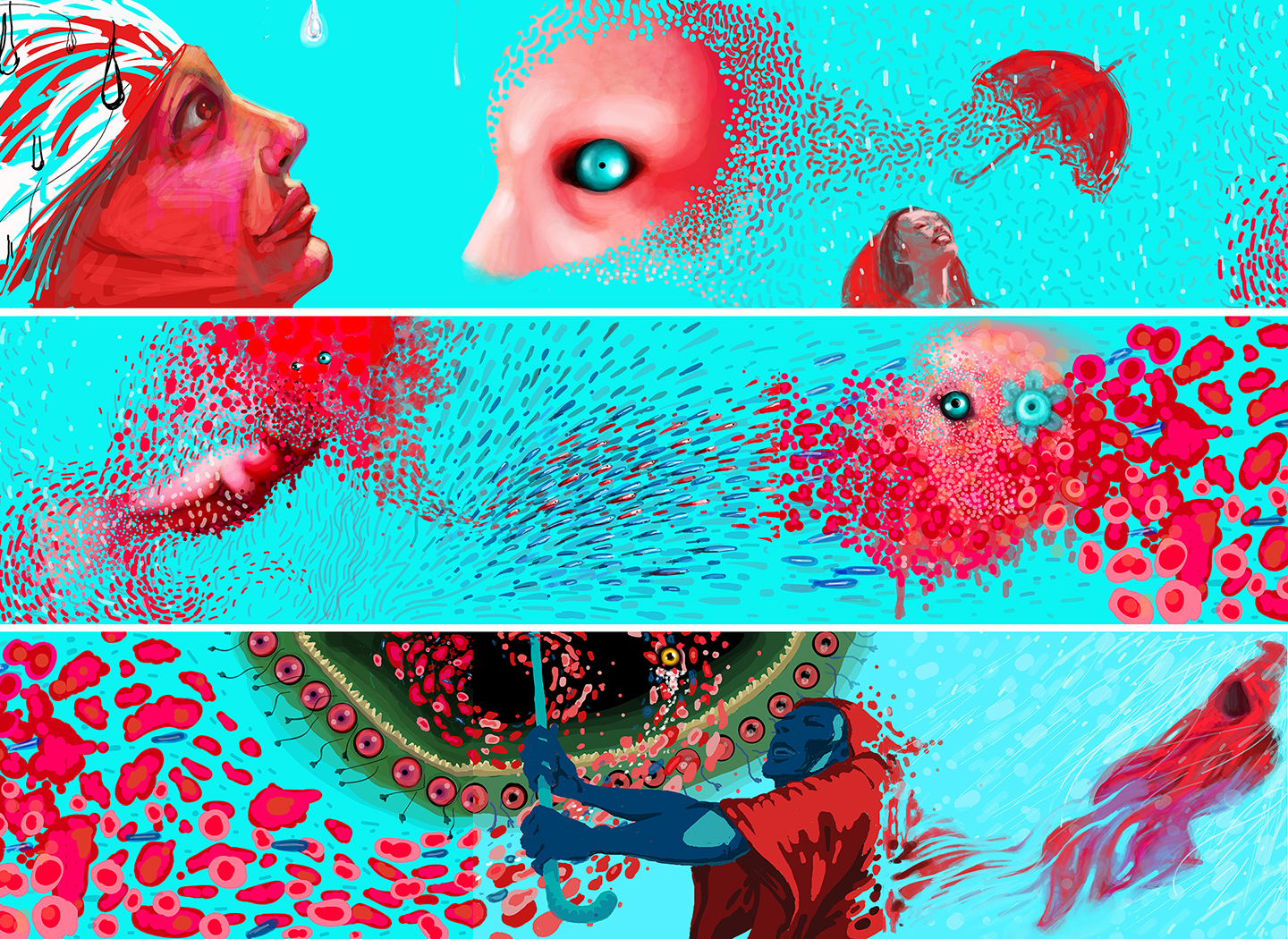 
The C&W artworks are truly rare because of the unique way in which they were made. Each artwork belongs to a visual conversation made on DADA, the only platform in the world where people speak to each other through drawings, creating collaborative art.

This curated collection with a Halloween theme officially launched on October 31, 2017. It comprises 108 unique artworks made by 30 artists on DADA. The 2017 ERC20 Creeps have a total of 16,600 digital editions with 5 different levels of scarcity, which represent the significance of the visual conversations that the artworks belong to. 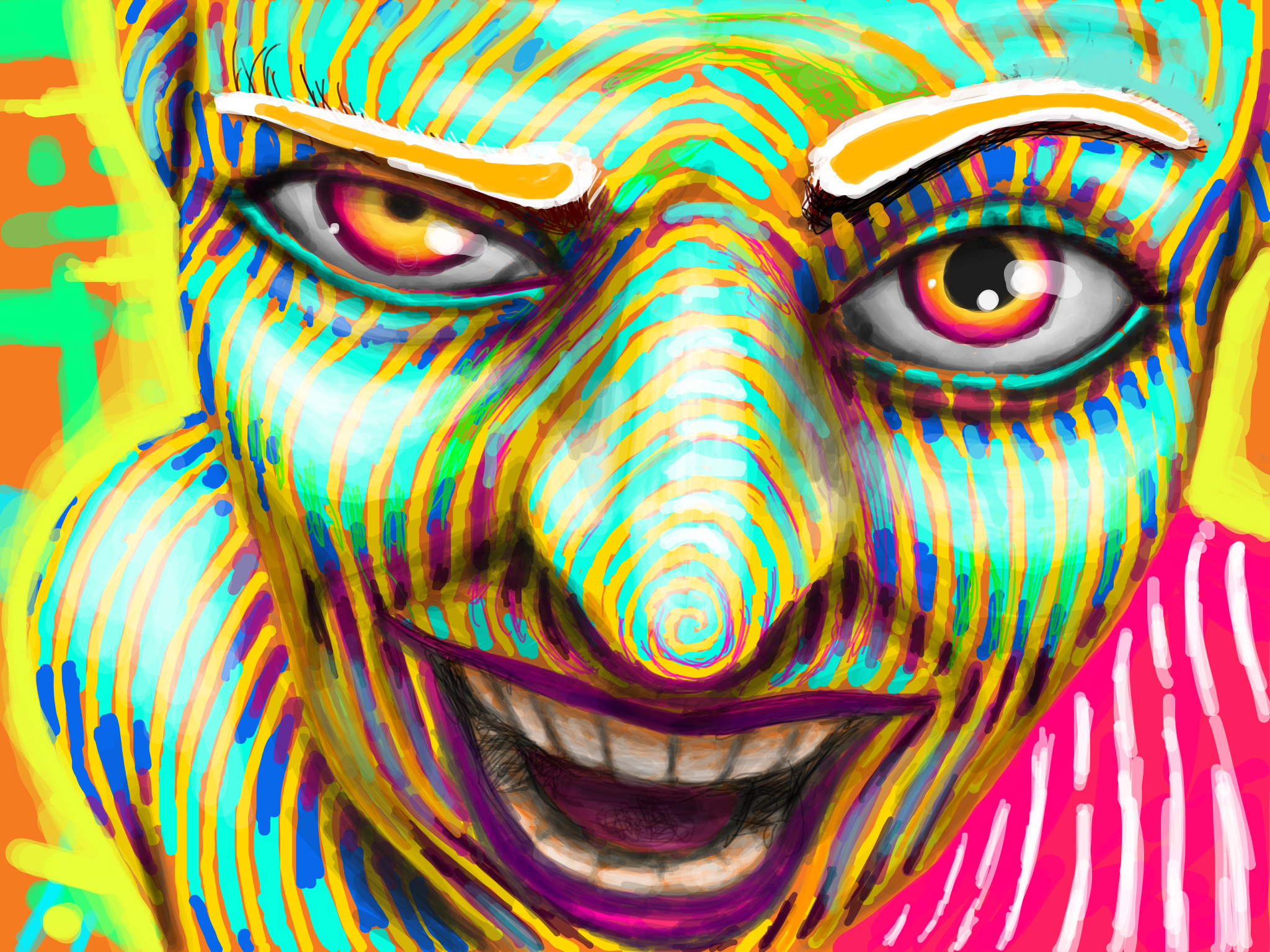 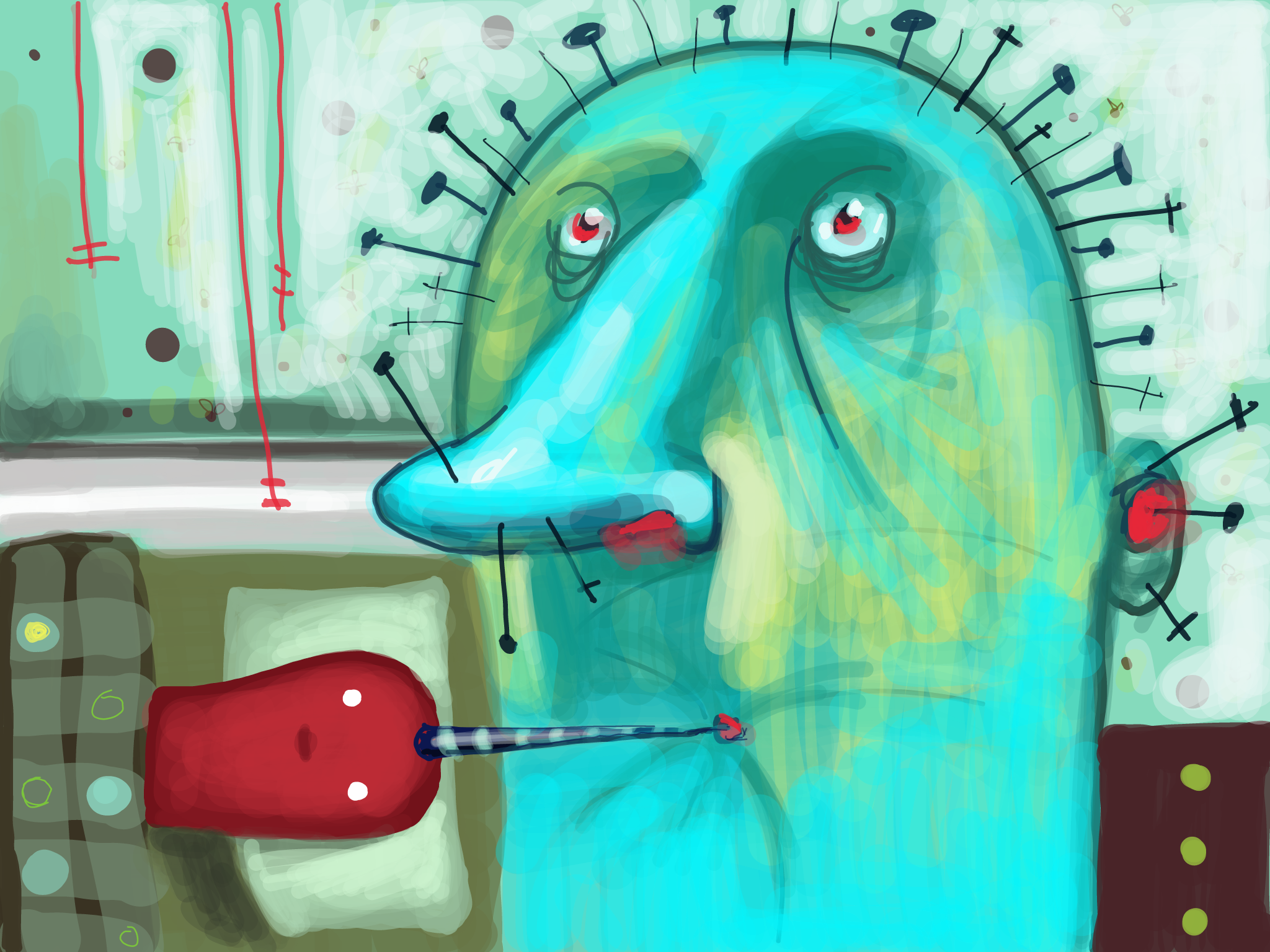 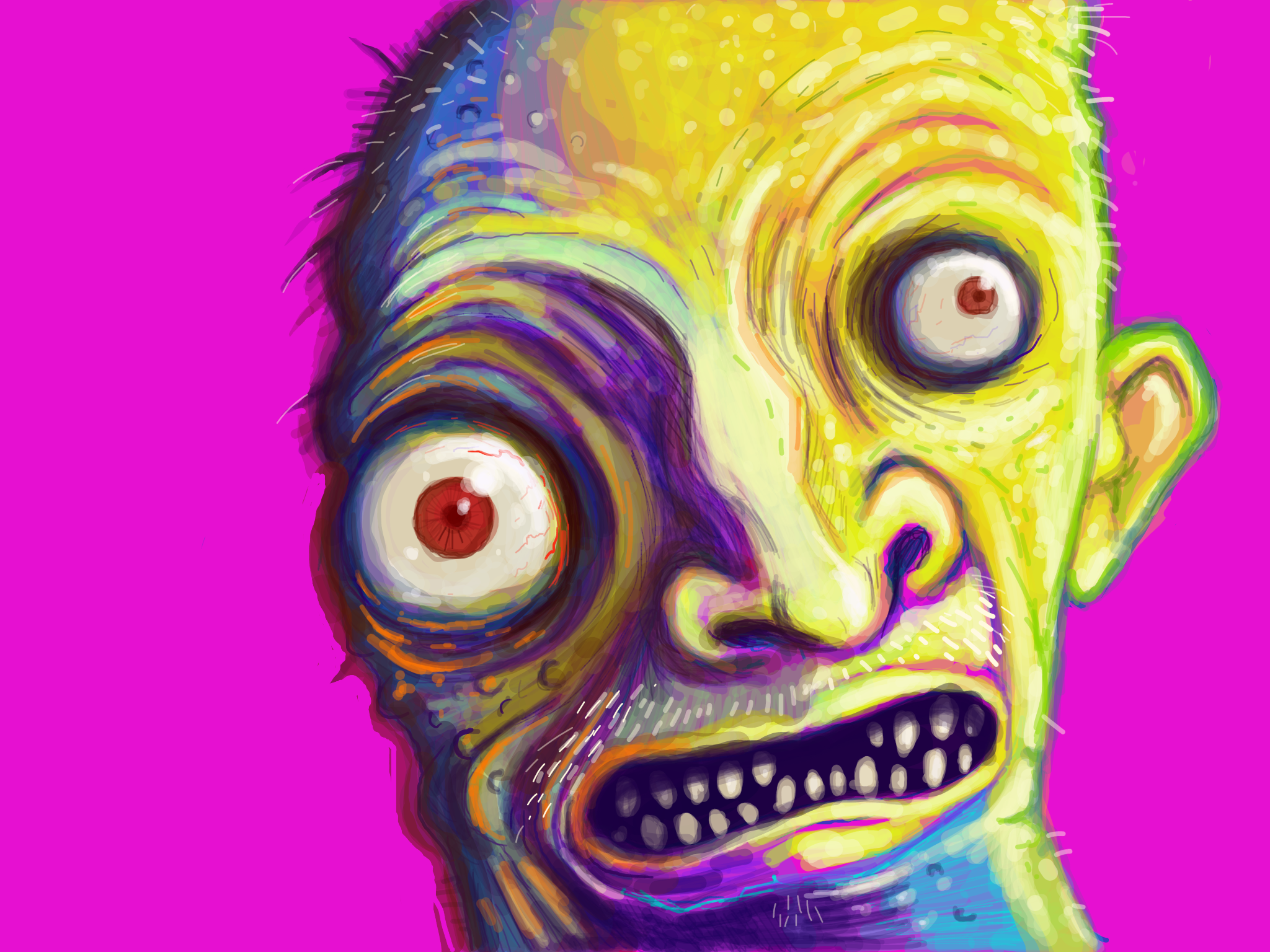 
Back in 2017 when we were creating the Creeps & Weirdos collection, it was like working with a blank slate. It was exhilarating to experiment in such an early space, kind of like clearing the jungle with a machete. It was all innovation.

By 2019, we upgraded the C&W smart contract into the then new ERC721 standard. This was during the onset of the Crypto Winter, so we cut the original supply in half. We paused the 2017 contract, airdropped a new ERC721 NFT to every 2017 collector, and retired the collection.

Fast forward to March 2021. While we were hatching our plans to reissue the C&W collection the world finally caught up to NFTs. Some NFT “archaeologists” rediscovered the C&W and beat us to the punch, an event that we affectionately call ”the Apestorm”. Hundreds of people then “aped” on this collection that had been off the market for two years. But there was a catch: these historic NFTs could not be traded on secondary markets, because of the lack of royalty standards on Ethereum.

We spent the 5 months that followed looking into our contracts, searching for ways to unlock our NFTs while preserving their provenance and also reuniting the two tokens that were diverging with every OTC sale. After going down every possible rabbit hole, we realized that the most direct link to provenance was the historic 2017 contract. Unpausing it meant that in order to truly keep it as one collection we had to burn the 2019 contract, but each one of them had its own historical importance and its own quirks.

We therefore decided to honor the history behind this collection with all its experiments and discoveries.
Like fine wine vintages, The Creeps & Weirdos is one collection that has two editions with two historic smart contracts; the same artworks represented in two different tokens, a 2017 ERC20 Creep or a 2019 ERC721 Weirdo, with their different characteristics, stories, and nuances. We are thrilled to introduce them for trading once again.


In order to honor this historic collection and make it available for people to collect, we conducted a complex Rescue Operation of the 2017 ERC20 Creeps. This involved creating our own bots and conducting rescue contracts in order to prevent bots from buying the entire collection at 2017 prices and to ensure that our community, artists, and individual collectors could participate in the sale. To be able to repurchase the entire collection and pay the gas fees for over 15,000 transactions we needed resources.

Metapurse, the largest NFT fund in the world, purchased a complete set of the historic 2017 Creeps & Weirdos NFT Collection for 500 ETH and an additional curated selection of Creeps & Weirdos for 105 ETH. This purchase was instrumental to pay for the gas required and to make the rescue happen. 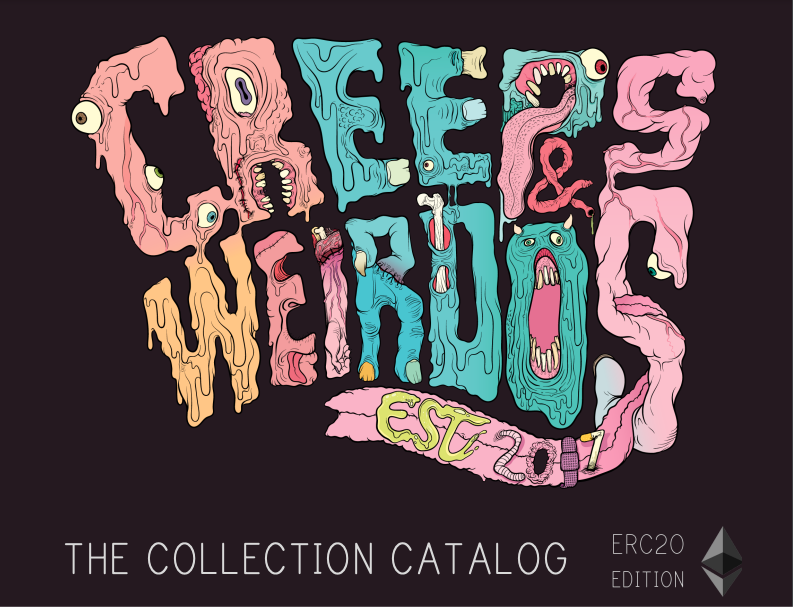 Browse the catalog created by Artefact

History In The Making


DADA anticipated the NFT revolution in a Bitcoin Magazine article published on September 21, 2017. Since then, we’ve actively contributed to the development of the NFT ecosystem and shared our ideas at MIT, Christie’s, NYU, the Hackers Congress and SXSW, among many other prestigious events and conferences. Already in 2018, our keynote presentations at the first Rare Art Fest and the Ethereal Summit demonstrated our commitment to put an end to the myth of the starving artist.

In early 2019 we retired the Creeps & Weirdos collection and focused on exploring possibilities beyond the markets, into the emerging field of token economics. In June 2020 we presented our white paper The Invisible Economy at the RadicaXChange conference.

The Creeps & Weirdos strongly influenced our vision for the Invisible Economy. The return of the C&W marks the beginning of a new era in which 100% of the revenues will go to the DADA Fund and be distributed to the community in the form of basic income.

“The NFT space is chock-full of financial and technological innovation, but what truly sets it apart is the unique opportunity to ‘do it right’. By infusing it with diversity, value distribution, and sheer artistic virtuosity, Creeps & Weirdos have reimagined the collectible movement and done it right.”
Metakovan, Metapurse Founder.

You are about to be part of this history. Join us as we keep exploring and creating community.

For questions and community, please join our Discord.

Do I need to register for the general sale?
No. The general sale aka Public Marketplace is open to the public.
You just need your MetaMask wallet and ETH cryptocurrency.
When does the Public Marketplace open?
The public marketplace opens late afternoon on October 5.
How do I purchase C&W?
To register for the presale, buy, sell, use, and store the 2017 ERC20 Creeps you need a MetaMask wallet. MetaMask is a cryptocurrency wallet with which you can store various tokens and NFTs.
Click here to set up a MetaMask wallet.
Can I use a different wallet than MetaMask?
We recommend you use MetaMask for optimal results.
Is the presale still going on?
The Presale ended October 1 at 10 am EST.
I registered for the presale. Will presale discounts/prices carry over to the Public Marketplace?
No. The discounts and special presale prices end when the presale ends.
I have a 2019 Weirdo. Can I still swap?
No. The swapping period closed on September 28 at 11:59 pm.
The gas is too high. What can I do?
On your MetaMask you can edit down the gas fees to something more reasonable. Make sure you mark the priority setting as low.
What can I do in this marketplace?
We will be launching the marketplace features on a rolling basis. It will open with the basic buy, sell and transfer functions and we will add from there. Eventually, we will feature bidding, choosing whether to honor royalties, stats, and more features.
How many artworks are in the C&W Collection?
There are 108 different drawings by 30 different artists. The original 2017 contract issued 16,600 collectible ERC20 tokens, known as Creeps. When we updated to the second contract in 2019 we reduced the supply to half; that is, 8,500 collectible ERC721 tokens, known as Weirdos.
Which contract is available in this sale?
Currently we are only selling the 2017 ERC20 edition.
Please explain the royalties.
The 2017 ERC20 Creeps feature automatic royalties coded into the smart contract, a first in NFT history. The original distribution on secondary sales is 40% on the collector’s profit to the DADA Collective. As part of the rollout of our marketplace, we will give collectors the option to decide if they want to share the profits or not
Why are the Creeps & Weirdos special?
The original 2017 ERC20 Creeps contract of these Ethereum collectibles was deployed on October 5, 2017.
They were the first with automated royalties coded into their smart contracts.
They use a modified version of the Cryptopunks contract.
They are digitally hand-made by artists exclusively on the DADA drawing platform.
DADA was the first decentralized marketplace for artists on Ethereum.
They are a unique hybrid between art and collectibles.
They are historical artifacts.

One collection , two contracts?
The collection involves an ERC20 token released in 2017 and an ERC721 token released in 2019.
There are 2 different sets of collectibles: similar to a 2017 ERC20 Creeps and 2019 ERC721 Weirdos. This is an important distinction. The 2017 and 2019 tokens share the same imprint image (the art is the same) but are technologically different with unique attributes.
What is the scarcity and supply of the Creeps & Weirdos?
The collection consists of 108 individual artworks and 5 levels of scarcity: Common, Uncommon, Rare, Very Rare, and Extremely Rare.
2017 ERC20 Creeps: 16,600 tokens.
2019 ERC721 Weirdos: 8500 tokens
Where can I buy the Creeps & Weirdos?
The Creeps ERC20 2017 Edition is available at the C&W marketplace.
Currently, the 2019 ERC721 Weirdos are only available OTC. Only the artworks “Faceless Woman” and “Cyberwar” can be traded on OpenSea.
What's OTC?
Over the counter. This means direct peer-to-peer sales that involve considerable risk.
Why can't I sell on OpenSea or other resale markets like Rarible?
The 2017 ERC20 Creeps can’t be resold in OpenSea because they are not standard, it is a modified ERC20.
The 2019 ERC721 Weirdos can’t be resold because our contract requires whitelisting. Even though you can see the artworks listed, you are not able to buy them or sell them, except for a couple of artworks (Cyberwar and Faceless Woman).
When can I buy and sell in OpenSea?
Trading C&W in Open Sea will require a different custom logic for each of the contracts. This will take time, if OS can be convinced by the community to do it.
What is your royalties scheme on secondary sales?
Our royalties are quite unique and were set in 2017 when this project was launched. The royalty structure is 40%, but only on profit. We do not calculate royalties on the amount the art was purchased for. The base cost that the owner paid remains intact and is fully recovered on resale. All royalties will be optional and go towards the DADA Fund.
Why 40% royalties?
Because we distribute all earnings among the community and that's the minimum we’ve calculated to make it sustainable for our artists.
How are the two collections different?
The 2017 Creeps are the genesis edition of a modified ERC20 token with 16,600 digital prints.
The 2019 Weirdos are an upgraded edition to the ERC721 token with 8,300 digital prints. 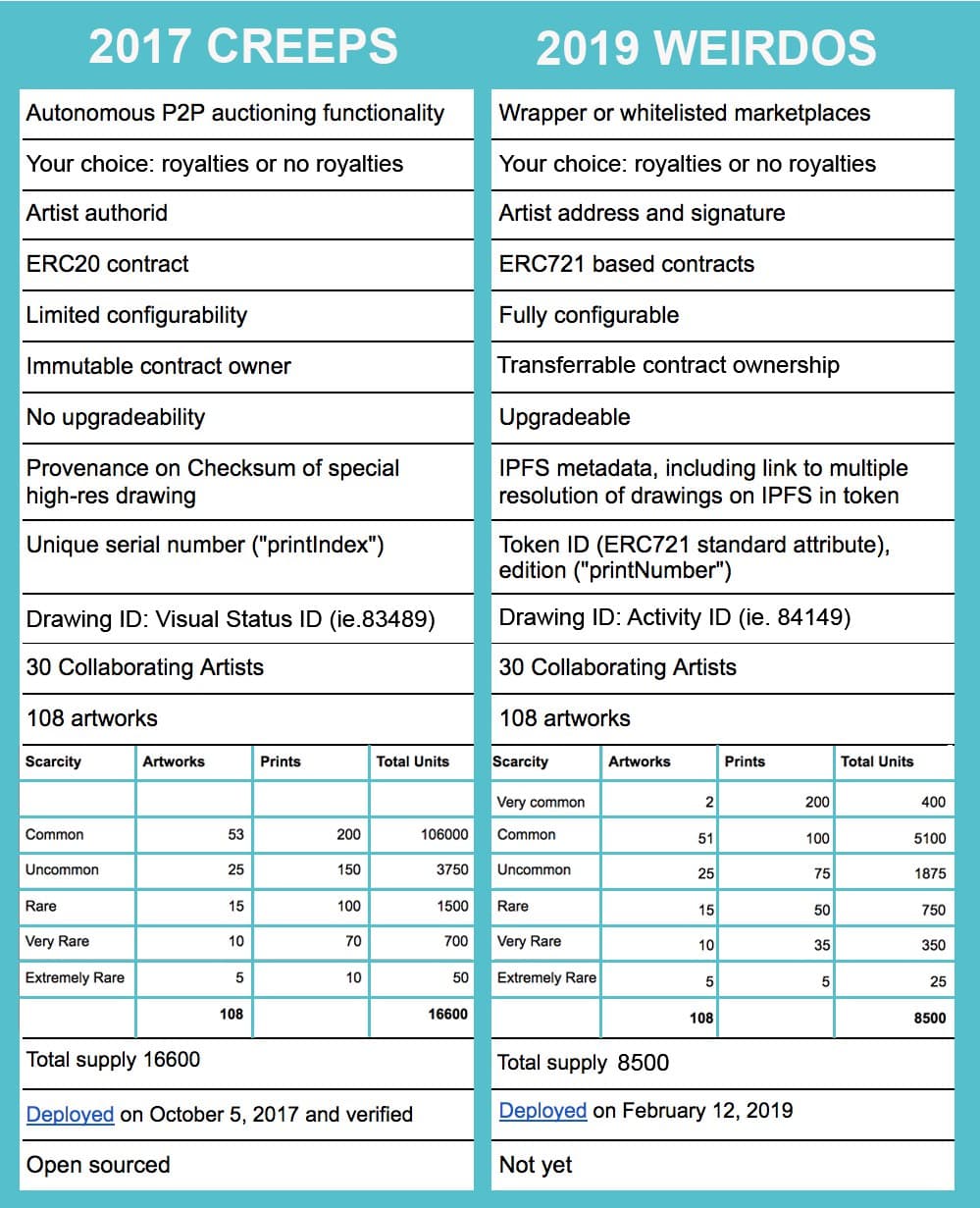